WHY I WROTE THE
FREE TOUR

AN INTRODUCTION BY RICHARD JONES

HOW IT CAME ABOUT

The idea for a free magical tour came to me in July 2007 when my wife, Joanne, and I took our two sons, Thomas and William, for a day out in London.

We did the usual "sights" and, no doubt like many parents, we were struck by just how expensive London was.

After all, we were a family of four, yet to visit just a few places and have lunch cost us well over £100. Still, we had a great day and the boys certainly enjoyed themselves.

FROM THE GREAT FIRE TO HARRY POTTER®!

As it happened, Thomas (my eldest) was doing the Great Fire of London as a school project that year and so on the next Sunday I asked him if he'd like me to take him and a few of his friends on a Great Fire Walk.

I have written several books about London and have been conducting my London walks and tours since 1982, so I put together a walk that I thought would keep Thomas and his friends entertained. I made it a bit of a treasure hunt so that they would have to look for things as they went round and, though I say so myself, they really did seem to enjoy themselves.

Walking back to Tower Hill, I happened to mention to one of Thomas's friends how I'd been doing my ghost walk one Saturday night when we happened to see the Knight Bus from the Harry Potter films parked up by the side of the Road. He was a bit puzzled as to why the Knight Bus should be in London (you mean it's real? was his exact response). I explained that a lot of the Harry Potter films had scenes that were shot in London and told him I could even take them to the Leaky Cauldron and Diagon Alley.

What 9 year old could resist an offer like that?

Thus it was that we went traipsing off to Leadenhall Market, which they all instantly recognised from the Harry Potter films. 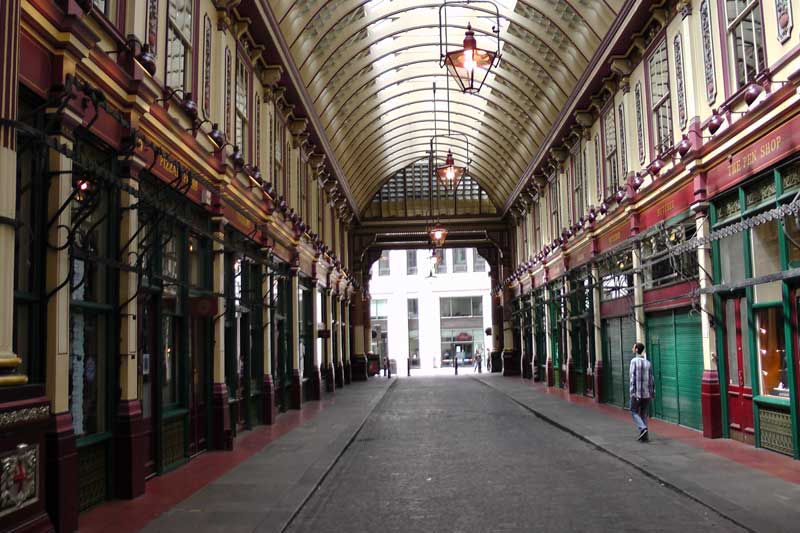 WE'D DONE IT FOR FREE

When we got home that night the boys were buzzing with the fact they'd been to Diagon Alley and that they'd had to find all these things in the streets of London.

But, the best thing was that, unlike our previous family outing, this particular trip had simply cost my train fare in to London! Overseas visitors might be interested to know that children under 11 can travel free on the London tube and bus network. Between 11 and 16 it is still free but they need to acquire an Oyster Card from a post office.

In other words I had taken a group of children in to Central London, they'd seen a lot, learnt a lot, and enjoyed themselves and it had cost virtually nothing.

That night we sat down as a family and watched two Harry Potter films. I have to confess I did become something of a bore by pointing out which London locations had been used for particular scenes.

THE ROUTE WAS PLANNED OUT

But, over the next few weeks, I began mapping out a possible Harry Potter Film Locations Tour of London and, whenever I could, I would go out and photograph the locations.

Other parents then began asking about particular Harry Potter locations and I decided that I would compose a free tour and put it up on the internet so that it could be enjoyed by families looking for their own low cost day out in London.

My timetable was delayed when I was commissioned to write two books, History and Mystery Walks of Edinburgh and A Jack the Ripper Casebook. But once these were finished I got down to mapping out the Harry Potter London Tour.

The whole Harry Potter Tour is now live so that it can be enjoyed by anyone who is interested in exploring London and visiting the Harry Potter Film Locations. 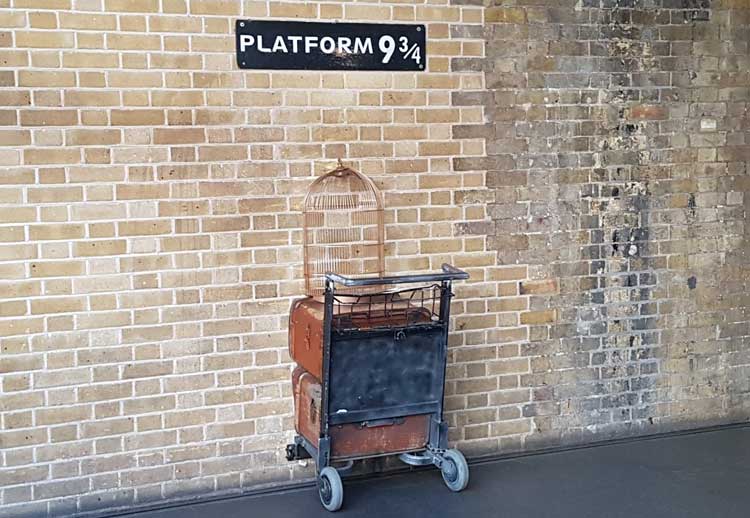 THERE ARE LOTS OF FREE THINGS

In addition I hope to include a section that parents will be able to use to locate other great, low cost or free places to visit in London.

As a parent myself, I am well aware of how expensive a day out with the kids can be. But as a travel writer who specialises in London, and as a London Tour guide with over 35 years experience, I am also aware of how many great things this city has to offer that cost little or nothing.

I WANT TO KEEP IT FREE

It is out of a genuine desire to make this aspect of London available to anybody who wants to discover England's Capital that I have put this website together.

The Harry Potter London Tour and Treasure Hunt is the first of, what I hope, will be series of free self guided London tours for families.

London is a great City, but some of its best attractions are often overlooked.

Massive advertising campaigns by attractions with deep pockets, can result in some of London's most awe-inspiring, yet absolutely free attractions, rarely featuring on a visitors itinerary.

Yet, as Hagrid might say, if you know where to go, you can entertain the kids everyday for a week or more and spend next to nothing doing so.

Best of all, because you can do all these things on foot (travelling between them by public transport) you really will be green and leave your footprints on the pavements rather than on the environment.

For up to date information on London, to ask questions, or to seek the advice of other tour participants, come and join Richard on his Facebook Page.