FOLLOW THOSE DEATH EATERS
ALONG AND OVER THE RIVER 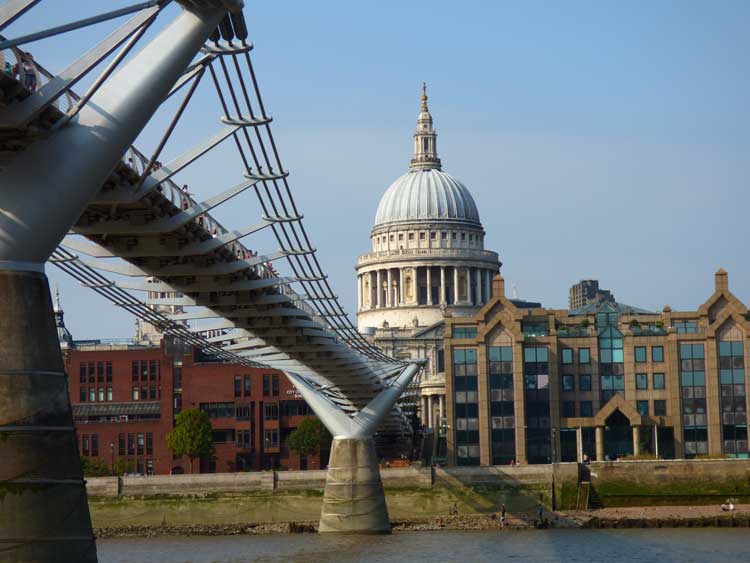 On this section of your Harry Potter perambulation, you will be following the route taken by the Order of the Phoenix as they fly over the River Thames, en route to 12 Grimauld place.

Having encountered some truly fascinating historical locations, such as the site of Shakespeare's Globe Playhouse and an old ferryman's seat, you will venture onto the Millennium Bridge to picture it being reduced to a mass of twisted metal by the Death Eaters in the opening scene of Harry Potter And The Half Blood Prince.

This section of the tour will end at St Paul's Cathedral, where, if time allows, you can go inside and view the Geometric Staircase which was featured in Harry Potter And The Prisoner of Azkaban as the staircase up which the Hogwarts students climb to reach Professor Trelawney's Divination classroom.

Continue past the Market Porter Pub and keep ahead to reach the end of Stoney Street and go left along Clink Street.

In the Middle Ages the area hereabouts was known as the Liberty of the Clink and was owned by the Bishops of Winchester.

Medieval law was very uneven and was largely a matter for the feudal lord who ruled a particular district.

It was in their capacity as secular lords that the Bishops ruled Bankside and turned it into London's chief pleasure district.

Being the landlords of such a colourful but dangerous area the Bishops found it necessary to operate a prison for offenders against such law and order as they chose to impose and thus the Clink Prison came in to being.

Although a prison was probably established within the palace in the 12th century, the first mention of the Clink was in 1509.

Later, in his monumental Survey of London, published in 1598, John Stow (1525 -1605) states that the prison was kept for those that broke the peace in the Bankside brothels.

In 1761 it was described as, "a very dismal hole where debtors are sometimes confined, but little used."

Nineteen years later it was burned down in the Gordon Riots of 1780 after which it was not rebuilt.

Its name, however, has survived in the word "clink" which immediately conjures up images of prison or of incarceration.

An exhibition of the gaol's history is located on the left towards the end of Clink Street.

Some guides claim that Clink Street was the inspiration for Knockturn Alley, although, if I am to be perfectly honest, I have to say that I think this is just a bit of wishful thinking.

Continue to the end of Clink Street, go right and, on arrival at the Anchor Tavern, go left along Bankside, and keep ahead, with the River Thames to your right. Ahead of you is:-

In the broomstick flight scene in Harry Potter and the Order of the Phoenix, Harry and the members of the order are shown flying towards Southwark Bridge albeit the bridge is out of sequence for the direction they are flying from.

Having flown through docklands, they are shown flying towards Southwark Bridge ahead of you.

But the next scene shows them heading away from Tower Bridge and passing HMS Belfast which are in fact located beyond London Bridge behind you.

Perhaps a magic spell caused the bridge to move?

On arrival at Southwark Bridge, veer left and go right to pass through the tunnel that goes under the bridge.

Keep ahead along the riverside and pause on the left, just after the Real Greek restaurant at the junction with Bear Gardens.

On the wall of the Real Greek, on the left of Bear Gardens, you can see:-

THE OLD FERRYMAN'S SEAT - A RELIC OF BYGONE LONDON

As it says on the plaque, this seat (or to be more precise granite seat built into the wall) is of uncertain age, but is generally thought to be of "ancient origin."

In the days when just one bridge, London Bridge, spanned the River Thames, a ferryman used to sit here and wait to ferry people back over the River Thames to the City of London. 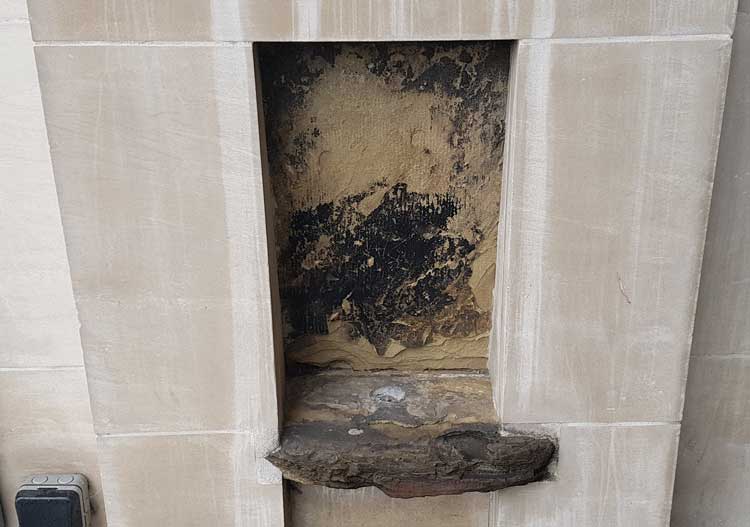 Keep ahead, keeping close to the wall by the Riverside - you have some stunning views of St Paul's Cathedral on the other side of the River - passing on the left the entrance to Shakespeare's Globe, which if time permits is well worth a visit.

A blue plaque on it wall remembers:-

Sam Wanamaker (1919 - 1993) was an American actor and director whose determined, and admiral, perseverance against some pretty large odds, brought the Globe to the south side of the River Thames and transformed what, until the late 1980's had been an uninspiring and derelict London enclave into the thriving district that it is today. 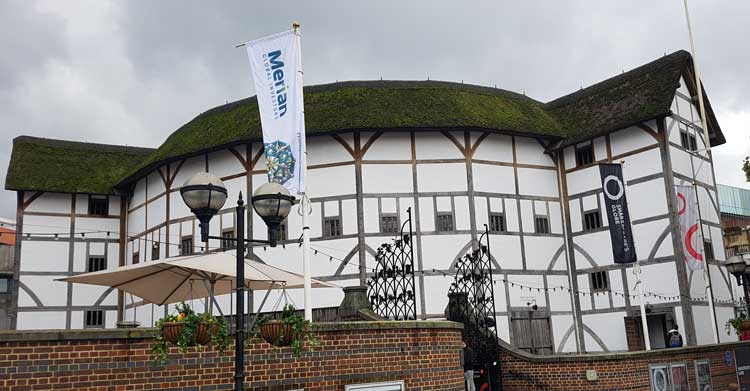 He was also the father of the actress Zoe Wanamaker, who played the role of games mistress, Miss Hooch, in Harry Potter And the Philosopher's/Sorcerer's Stone.

Keep ahead, still keeping close to the wall by the Riverside.

Just after the Globe, look left at the line of older houses, the first of which, the one with the cream exterior, is:-

As you gaze upon this old Bankside building you really are not only looking upon a genuine piece of local history but you are also looking upon a structure that, in some ways, has even had its own history invented for it!

The present building, which probably dates from the 1700's, is the sole survivor of a line of houses that once stood here.

There is a plaque on the front of the house which commemorates this as the house in which Sir Christopher Wren lived during the rebuilding of St. Paul's Cathedral on the opposite bank of the river.

It makes for a delightful flight of fancy to picture Wren gazing from these time-worn windows watching his masterpiece take shape across the river.

But it must remain just a flight of fancy since St. Paul's was almost complete when this house was built around 1710 and anyway Wren's addresses are well known and this most certainly wasn't amongst them!

The plaque also makes the even more implausible claim that Catherine of Aragon spent a night here in 1502 on her first arrival in England. 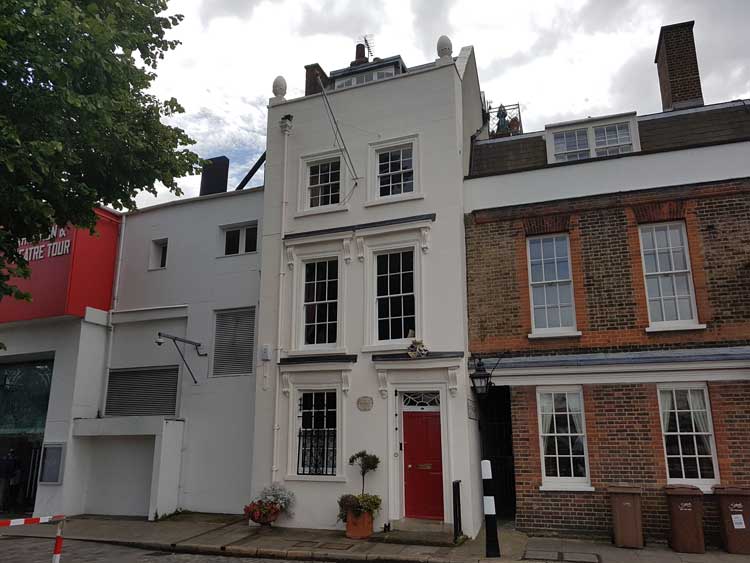 Make your way to the Millennium Bridge ahead of you, and use it to cross the River Thames.

In the opening sequence of Harry Potter and the Half Blood Prince, the Death Eaters continue their attack on London by coming up from behind and then round each side of the dome of St. Paul's Cathedral ahead.

They then swoop down onto the bridge causing the silver supports on either side to buckle and then snap.

Those unfortunate Muggles, who are unlucky enough to be crossing the bridge at that moment, are helpless as the bridge sways, lurches and then falls into the river as a twisted heap of scrap metal.

Picture, for a moment, the dark shadows of the Death Eaters coming up from behind St. Paul's Cathedral ahead. Imagine that they are swooping down towards the bridge.

Now, see how quickly you can get over the bridge to see if you would stand any chance of getting across it before the Death Eaters destroyed it!

As you walk (or run) over the Millennium Bridge you might notice little art works, hundreds of which cover the floor surface of the bridge.

These miniature masterpieces were created by artist Ben Wilson, better known as "the Chewing-Gum Man.

If there is one thing that people discard an awful lot of all over the streets of London, it is chewing-gum; and so, over a decade ago, Ben Wilson decided to turn other folks' unsightly detritus into something a little more pleasant to look at.

Using a blowtorch and layers of acrylic paint and lacquer, Ben Wilson created thousands of these miniscule, brightly coloured artworks all over the streets of London, with over a hundred of them adorning the footway of the Millennium Bridge.

There are London scenes, bizarre creatures, and abstract patterns, all of them painted onto blackened pieces of discarded chewing-gum, and all of which, subversive as they are, fitting perfectly with the close proximity to nearby Tate Modern.

They certainly make for an intriguing crossing of the Millennium Bridge, so see how many you can spot as you make your way towards St Paul's Cathedral on the opposite side of the River Thames. 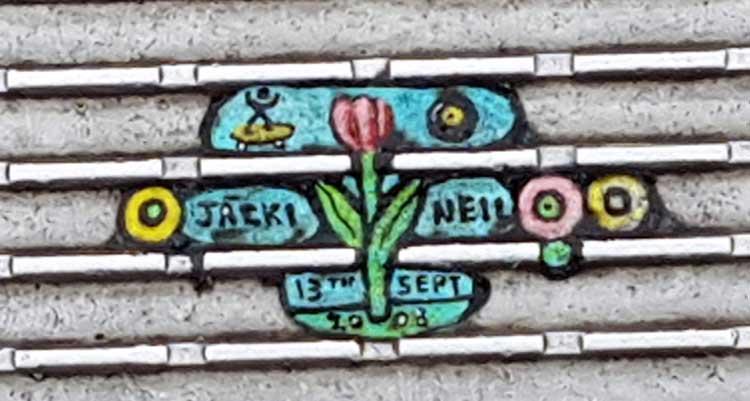 A piece of Chewing-gum art on The Millennium Bridge

Providing you made it over the Millennium Bridge before the Death Eaters swooped, keep ahead, walking in the direction of St Paul's Cathedral.

For several weeks, prior to the opening of the film Fantastic Beasts: The Crimes Of Grindalwald, which premiered in London on 16th November, 2018, the section of walkway ahead of you as you come off the Millennium Bridge, was lined on either side by nine, 15-feet tall wands, including those of Harry Potter. Ron Weasley, Albus Dumbledore and Newt Scamander.

This was, however, a temporary installation, aimed at raising awareness of J. K Rowling's charity, Lumos, which promotes an end to the institutionalisation of children worldwide.

Wands on the approach to the Millennium Bridge in November 2018.

Keep going, to cross the two sets of traffic light to arrive at St Paul's Cathedral.

Go left alongside the Cathedral and make your way to its main entrance.

At this point, if time allows, you may wish to visit St Paul's, albeit the visit will add at least an hour, probably more, to your itinerary.

However, if you do decide to go inside, once you have paid at the admission, on the other side of the right door, in the right tower of the Cathedral, you will find a doorway. Step through it and look up at:-

The Dean's Stair, which is commonly known as the Geometric Stair, was constructed in the Cathedral's southwest tower in 1705.

It is a spectacular stone spiral, consisting of eighty-eight Portland Stone treads which rise 50 feet around the perimeter of a cylindrical space.

They were not built into the masonry, but, rather, each step is individually shaped to bear on the edge of the one below.

The stair was featured in Harry Potter And The Prisoner of Azkaban as the staircase up which the Hogwarts students had to climb in order to reach Professor Trelawney's Divination classroom.

Please be sure to respect the "No Photography" sign.