DISCOVER THE LOCATION OF
GRINGOTTS BANK 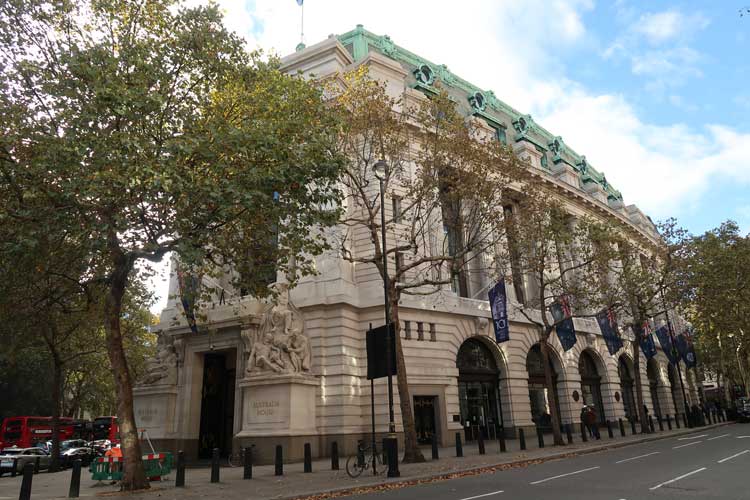 This section of the tour takes you on a bus ride along Fleet Street, where, you must be on the look out for two giants who have been striking a bell since 1683.

Having disembarked from the bus, you will make your way to the location that was used as the interior for Gringotts Bank.

Once you've gazed in through its doors (sadly Muggles are not allowed to enter), you will head off in search of a ferocious-looking dragon that guards the entrance to the City of London.

So, all in all, a rich and rewarding time awaits you on this part of your journey through the London of Harry Potter.

With your back to St Paul's Cathedral, pass to the right of the white statue of Queen Anne.

Go right on the other side and descend Ludgate Hill until you come to the bus stop with the white "F" on it. From here, you can take a 4, 11, 15 or 76 bus to your next Harry Potter locations.

You will need to get off at the fourth stop - The Royal Courts of Justice Stop.

Turn right off the bus, walk past the black phone box, keep ahead over Milford Lane, and, at the traffic lights, cross to the cobbled island in front of the church on which you will see three statues.

Behind the statues is St Clement Danes church.

ORANGES AND LEMONS SAY THE BELLS OF ST. CLEMENT'S

The rhyme, "Oranges and Lemons", has, over the centuries appeared in varied versions and it has been suggested that it originated with a street dance in the course of which people danced through the streets to the ringing of the bells.

WHICH ST CLEMENT'S IS IT?

There is some debate as to which church the rhyme is about as St Clement Eastcheap (over near the Tower of London) claims to be the actual church being referred to, on account of the fact that there was once a market that sold oranges close to old London Bridge, which was very close to St Clements Eastcheap.

However, those who favour St Clement Danes as the "Oranges and Lemons" Church point out that it was customary for ships to offload their cargoes to the west of the City of London, on what is now the Victoria Embankment, in order that they might avoid the City's expensive harbour dues.

In those days the churchyard of St Clement Danes reached down to the riverbank and cargoes were transported through it to nearby Clare Market.

The church probably made a charge on all fruit that passed through its churchyard and thus this was the church where the tolls were collected for "Oranges and Lemons".

If you time your arrival to arrive at the church at 9am, Noon, 3pm, 6pm, and 9pm, you can listen to the church bells chime "Oranges and Lemons say the bells of St Clement's."

With your back to the church's main door, pass to the left of the middle statue, and go straight ahead to cross over the smaller road and keep ahead to pause outside:-

Please note, the doors of Australia House are only open Monday to Friday, so, if you are doing this on a weekend, or a public holiday, you will not be able to get a view of the interior of the building.

The glorious marble interior of Australia House became the interior for Gringotts, the wizards bank run by goblins in the Harry Potter films.

The filming was done inside the building, which is not normally open to the public, although a glimpse of the sumptuous interior can be obtained with a discreet peep through the doors!

What are clearly visible, by looking through the glass doors, are the magnificent crystal chandeliers that are a prominent feature of Gringotts banking hall in the films. 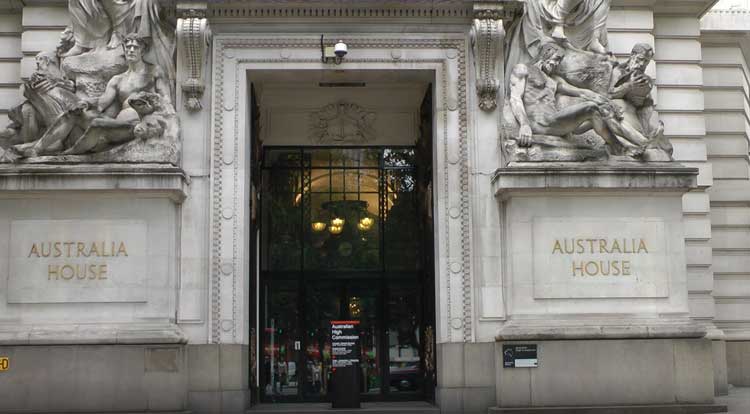 Take a quick peek through the doors into Gringotts Bank!.

In Harry Potter and the Philosopher's (Sorcerer's) Stone Hagrid brings Harry to Gringotts prior to Harry shopping for his supplies for Hogwarts.

The scene begins with them walking through Diagon Alley and Harry wondering "How am I to pay for all this, I haven't any money."

The two of them are then shown walking through the hall that you can glimpse through the doors of Australia House, where goblins work at desks on either side.

WATCH THE SCENE INSIDE GRINGOTTS BANK

In Harry Potter and the Deathly Hallows Part Two, Harry, Ron, Hermione and the goblin, come to the bank to remove the horcrux from Bella Lestrange's vault.

Having done so, Harry, Ron and Hermione make their escape on a back of the dragon which flies up from the vaults.

The first the Goblins - who are working at their desks on both sides of the hall - are aware that things aren't quite right is when the chandelier begins to shake.

Suddenly the dragon smashes through the floor and hits the chandelier which then crashes to the floor.

Fortunately, it appears that a wizard was on hand to repair and re-hang the chandelier!

Actually, in case you haven't guessed, they didn't actually destroy the interior of Australia House for this memorable scene, but, rather, they rebuilt the interior of Gringotts at the Leavesden Studios, and it was that that was destroyed.

Once over the road, descend the left side of the street directly opposite (which is Arundel Street).

At the end of this street go left along Temple Place, and, just before the red phone box, pause on the left outside:-

Although this flamboyant building boasts an exquisite exterior, and most certainly would not look out of place in Tudor London, it is in fact relatively modern.

It dates from 1895 when it was built for the immensely wealthy American William Waldorf Astor.

It was constructed to his own detailed specifications and when completed he used it as his residence and estate office.

Although it has never been used as a Harry Potter film Location, one can't help feeling that it would probably make an ideal setting for a school of wizardry, or even a setting for a Magical Ministry. 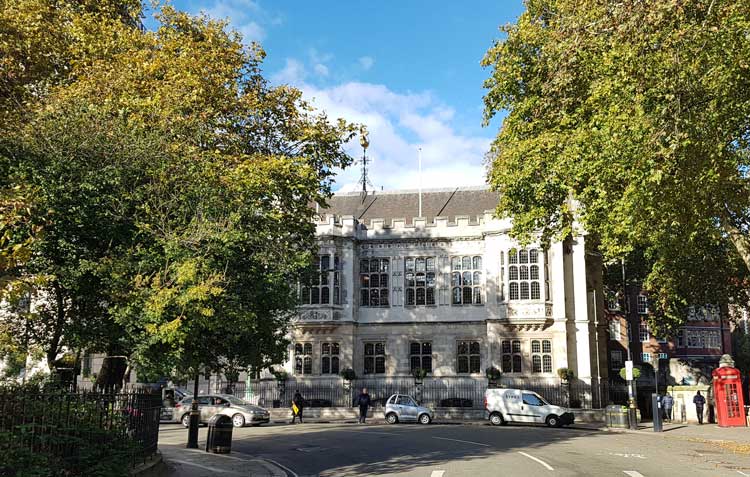 Continue ahead, following the walkway as it swings right to pass the phone box.

Go left at the traffic lights onto the Victoria Embankment, and pause alongside the City dragon.

The silver Dragons here on Victoria Embankment (there's also one on the opposite side of the road) mark the boundary between the City of Westminster and the City of London.

Greater London, under which most of London comes, covers an area of 1579 KM sq. (609 square miles). It is made up of 31 boroughs plus the Cities of London and Westminster.

The City of London itself is a geographically small area consisting of one square mile (2.90KM sq.).

The boundaries of the City of London have remained more or less constant since the Middle Ages and those boundaries are, quite literally, guarded by dragons.

Indeed dragons are to be found encircling the entire City of London.

Of course, to the Muggle mind, these amazingly magical fire-breathing lizards are nothing more than creatures of mythology that don't actually exist.

This widely held Muggle belief is a testimony to the efforts of the Ministry of Magic which has worked tirelessly to foster this belief amongst Muggles the world over and to keep these huge creatures hidden from the prying Muggle eyes.

In the world of Wizards however, dragons are considered to be the most amazing magical creatures in the world, and Gringotts Bank, of course, uses them to guard its high security vaults. 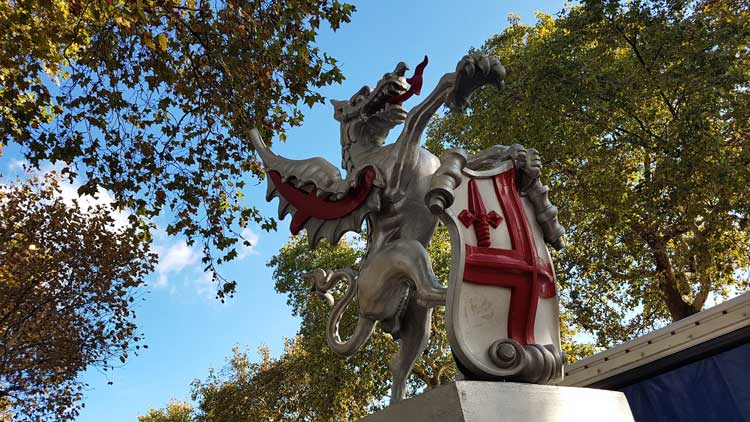 Backtrack and then cross straight over the traffic lights to walk along the Victoria Embankment, keeping the railings of the garden to your right.

At the end of the railings, go right, and then left to enter Temple Underground Station.

Go through the ticket barrier, and descend to the Westbound platform, which is the one to the left.