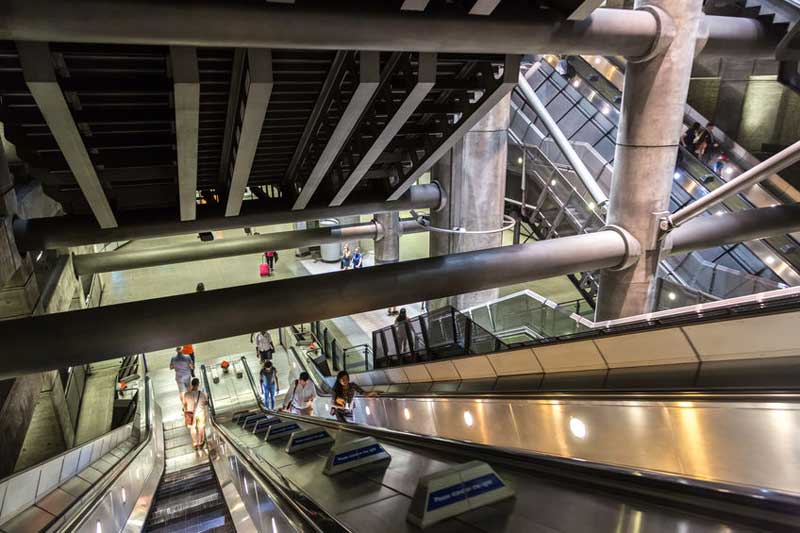 HAVE YOUR BROOMSTICK READY

For this part of the tour you will be heading to Westminster Underground Station where, in Harry Potter and the Order of the Phoenix, Mr. Weasley had a difficult encounter with a ticket barrier!

Having found your way out of the station, you will head over Westminster Bridge to enjoy some magnificent views of the Houses of Parliament from across the River.

Following this delightful stroll, you will follow the Knight Bus over Lambeth Bridge before encountering a possible Dementor on a fountain in a Westminster garden!

You have arrived at the station that Mr Weasley and Harry arrive at en route to Harry's hearing at the Ministry of Magic.

It was one of these barriers that so confounded Mr Weasley as he tried to exit through it.

Let's hope you have better luck! 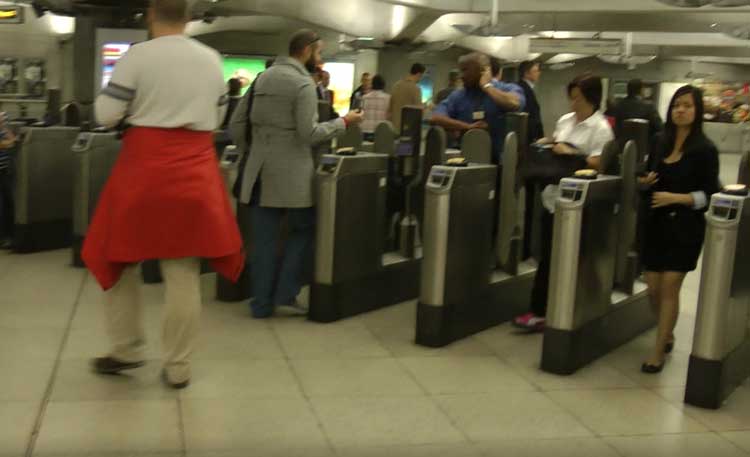 Having, hopefully, got through the barriers, go up the stairs directly in front of you. Turn right, keep ahead over Derby Gate, and, on arrival at the corner, go left over the traffic lights, walking towards the Houses of Parliament on the other side of the road.

Turn left on the other side, and keep ahead, with the Houses of Parliament to your right, and walk straight onto Westminster Bridge.

THE HOUSES OF PARLIAMENT AND THE ORDER OF THE PHOENIX

In Harry Potter and the Order of the Phoenix, the order fly past the riverside Terrace of the Houses of Parliament (to your right) and under Westminster Bridge, over which you are walking, en route to 12 Grimmauld Place. 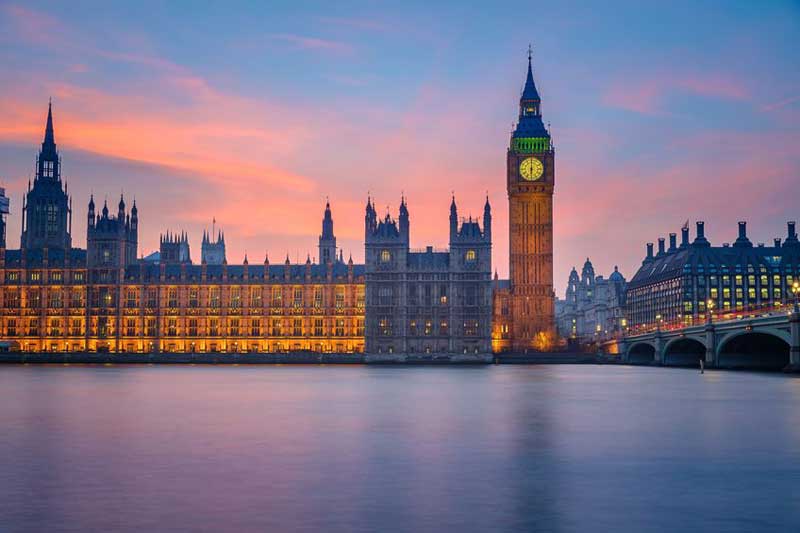 The Order of the Phoenix fly past the Houses of Parliament.

On arrival on the opposite side of the bridge, turn right to descend the steps and keep ahead along the riverside walk way, with a wonderful view of the Houses of Parliament on the other side of the river.

Be sure to note the dolphins that are coiled around the lamps that line the riverside wall to your right.

As the riverside walk way opens out, to your left is red-brick gatehouse of:-

Lambeth Palace has been the residence of the Archbishops of Canterbury since 1207.

The red brick gatehouse that you can see to your left dates from 1495.

To its right is the church of St Mary-at-Lambeth, which houses the Museum of Garden History. 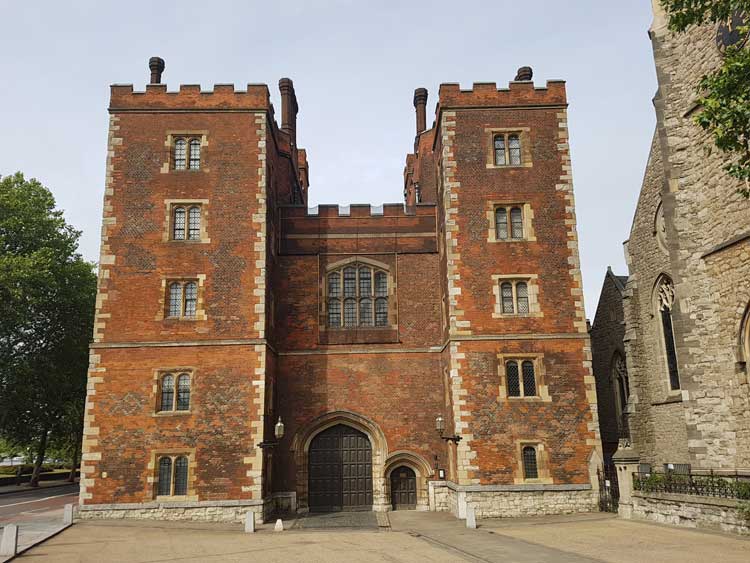 The Tudor Gatehouse of Lambeth Palace.

Just past the Thames Cruises Pier, go up the steps and turn right on to Lambeth Bridge.

In Harry Potter and the Prisoner of Azkaban, this is the bridge on which the Knight Bus was filmed squeezing between two buses as it drives over the bridge. 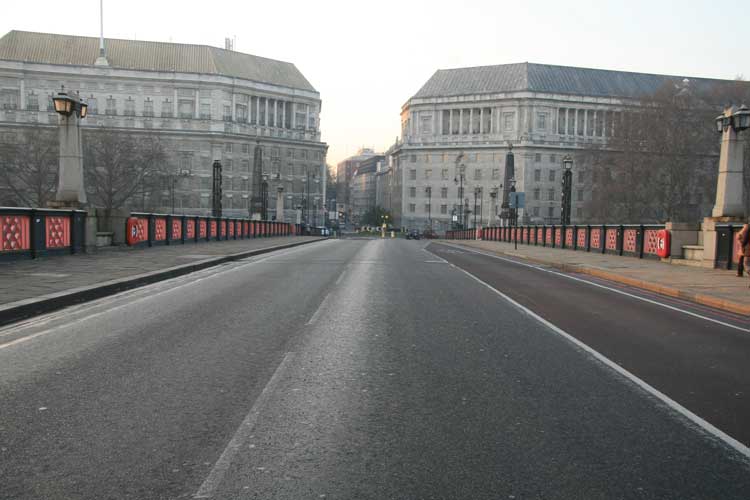 On arrival on the other side of Lambeth Bridge, go right through the gates in to Victoria Tower Gardens.

Keep ahead until you arrive at the very colourful:-

The fountain was built to commemorate the emancipation of slaves that resulted from the passing of the Abolition of Slavery Act in 1833.

It was donated by Charles Buxton, MP, in memory of his father Sir Thomas Fowell Buxton and those who shared his struggle to abolish slavery in the British colonies.

IS THIS A DEMENTOR THAT I SEE BEFORE ME?

This might be my imagination playing tricks on me,and I honestly hope that it is, but don't you think that the lion's head above the drinking bowl that looks towards the main road bears a chilling resemblance to a Dementor? 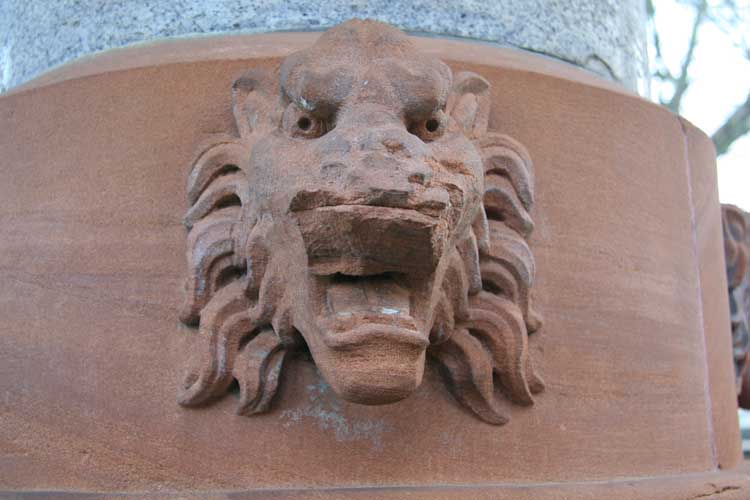 Could this be the face of a Dementor?

TIME TO MOVE ON!

Of course this could be a little bit of wishful thinking on my part, but, then again, are you feeling cold, as though the life force is draining out of you?

Go left and pass the fountain and exit the gardens on to the main road.

Turn right, and keep going past the Houses of Parliament to cross Bridge Street via the traffic lights.

Go left on the other side, cross over Parliament Street, and head right along it.