A VISIT TO DIAGON ALLEY
MUGGLES AND MAGICIANS 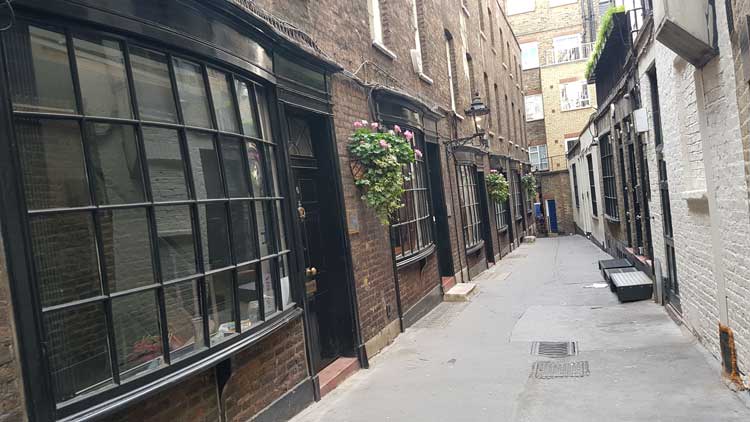 On this section of your Harry Potter in London journey you will discover a magicians emporium, tucked away beneath the streets of Westminster, before making your way through two thoroughfares that may well have provided the inspiration for Diagon Alley.

You'll also follow the Death Eaters as they swoop down over Trafalgar Square in Harry Potter And The Half Blood Prince.

A DOOR KNOCKER IN CRAVEN STREET

Tradition holds that Dickens got the idea for the doorknocker's transforming into Marley's face in A Christmas Carol from a particularly grotesque old doorknocker he spotted one night while walking along Craven Street.

Apparently, the owner of the house on whose door it hung became somewhat alarmed when an enthusiastic photographer approached her and asked for permission to photograph it. She immediately had it taken down and placed it in a bank vault, since when its whereabouts are unknown.

However, Craven Street can, at times, have a decidedly sinister feel to it, lined as it is with sturdy 18th century buildings, some of which still possess doorknockers.

So, why not set yourselves the task of deciding which house here looks the most haunted, and see if you can agree on which doorknocker would inspire Charles Dickens today?

Could this have inspired the doorknocker scene?

At the top of Craven Street, go left along Strand and walk to the traffic lights.

Veer right, and cross at the lights. Turn immediately left on the other side and keep ahead over the next crossing to arrive in Trafalgar Square.

Keep ahead and pause just to the right of Nelson's Column.

THE STAGE FOR THE DEATHLY HALLOWS PREMIERE

It was directly in front of Nelson's Column, that the stage was erected on which the stars of the film assembled and addressed the thousands of fans who had assembled in the square for the Premiere of Harry Potter and the Deathly Hallows Part Two.

The Premiere took place on 7th July 2011 at the Odeon, and two other cinemas in nearby Leicester Square.

However, space in Leicester Square itself was a little tight, owing to the building work that was going on in preparation for the 2012 Olympics.

In addition, it being the last ever Harry Potter film, Warner Bros was determined to pull out all the stops with a premiere that would exceed all others.

So the stars arrived, not in Leicester Square, but here in Trafalgar Square, where thousands of fans - suitably attired in Hogwarts robes, or else dressed as their favourite Harry Potter characters - braved the typical London summer weather, and camped out for several days in the pouring rain to greet the stars and to watch and cheer the speeches.

Then, via the longest Red Carpet in cinema history, the stars made their way to Leicester Square, where the film was shown simultaneously at THREE cinemas.

In the dramatic opening sequence of Harry Potter and the Half Blood Prince, as the Death Eaters launch their destructive attack on London from the air, they swoop down onto Trafalgar Square before shooting off along Charing Cross Road ahead of you.

keep ahead to the traffic light pedestrian crossing and cross over to the Church of St Martin-In-The-Fields. Walk past the steps and go next right along St Martin-In-The Fields Church Path, passing to the right of the entrance to the Crypt Cafe.

Keep ahead over Adelaide Street, and go down the stairs of Charing Cross Station.

Go left at their foot, and a little way along, on the left, is the entrance to:-

Davenports is the oldest family-run magic business in the world.

From the moment the dull thud of a loud bell announces your arrival, you find yourself confronted by a veritable cornucopia of all things magical and mysterious.

Ferocious-looking arm choppers, complete with severed arms, glimmer behind glass display cases. There are ESP and Tarot cards for initiation into the secretive world of divination, mediums and psychics.

You can even purchase a copy of the first book ever published on the subject of magic, The Discoverie of Witchcraft, written in 1584, at a time when the shop's assistants would probably have been burnt at the stake for the demonstrations of sleight-of-hand that they perform for visitors. 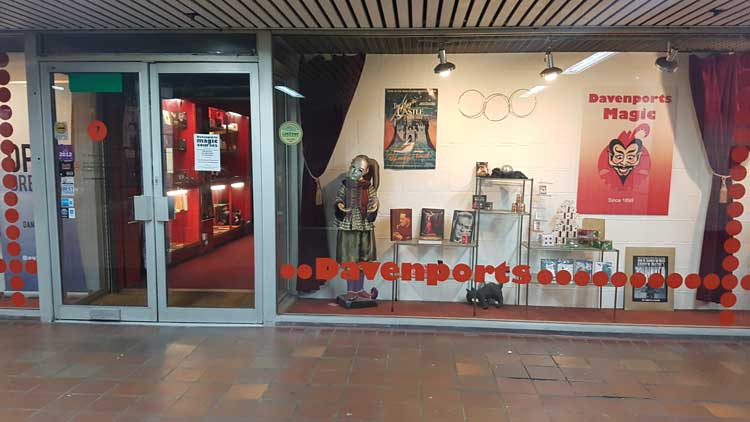 The shop front of Davenports Magic

Diagon Alley, "London's finest source for a wizard's every need," is described as being "just off Charing Cross Road."

The shop bears an uncanny resemblance to Flourish & Blotts, selling as it does a huge variety of magic books and other books of general magical interest. 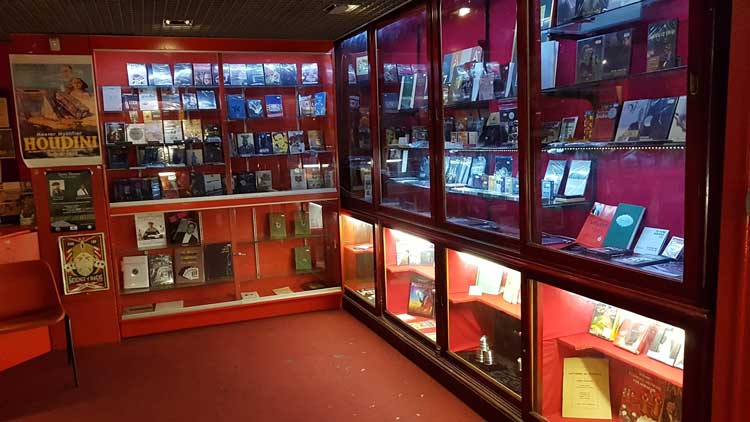 Exit left out of Davenports and go up the stairs, turning left at the top.

Go over Adelaide Street, and then veer right to cross over William IV Street towards the Institute of Chinese Medicine. Keep ahead and, immediately after The Marquis Pub, go left along Bedfordbury and keep ahead past the Lemon Tree Pub and the Colosseum Stage Door.

Keep going until, just after 20, Bedfordbury, you will see two bow windows on the left. Between them, turn left into the very narrow passage with pink brick walls, which is:-

This tucked away little alley, with its glorious Georgian facades, has a genuine aura of magical secrecy about it.

Indeed, this magical little passage is so easily missed that it could be said to be completely hidden from the Muggle world, just like Diagon Alley.

At night the alleyway is even lit by the flickering glow of gas lamps, it is a truly enchanting place. 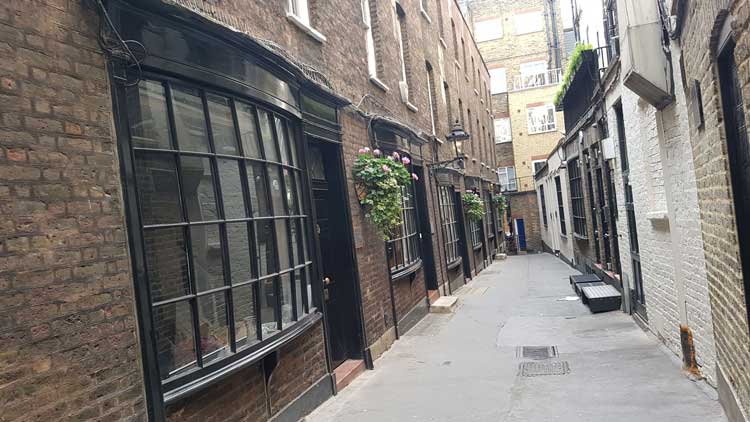 Was Goodwin's Court the inspiration for Diagon Alley?

Pass through Goodwin's Court, and, at its other end, cross diagonally left over St Martin's Lane to reach Cecil Court on the other side.

Cecil Court, on the other hand, most certainly does.

It is also "just off Charing Cross Road"; and, with its curious mix of bookshops and antique shops, it is a serious contender for the real Diagon Alley, or at least the thoroughfare on which Diagon Alley was based.

There is certainly a mysterious air about this delightful little thoroughfare, and the first shop on your right is even called The Witch Ball!

Although the window displays change, several of the shops display curious antique books in their windows, and some of the shop signs themselves are very colourful, not to say magical, in their own rights. 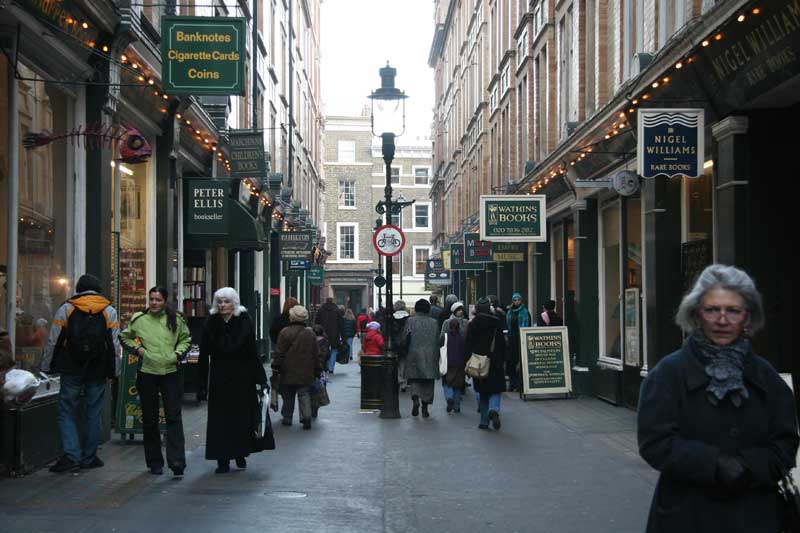 Watkins, the oldest occultist and mystical bookshop in the world, was founded in March 1893, by John M. Watkins on nearby Charing Cross Road.

In 1901, the business moved into Cecil Court and has been located here ever since.

The shop certainly has a unique character, and you could easily imagine pupil witches and wizards browsing its shelves for the text books they will need for their next term at Hogwarts.

You can even purchase dried dragon's blood powder here! 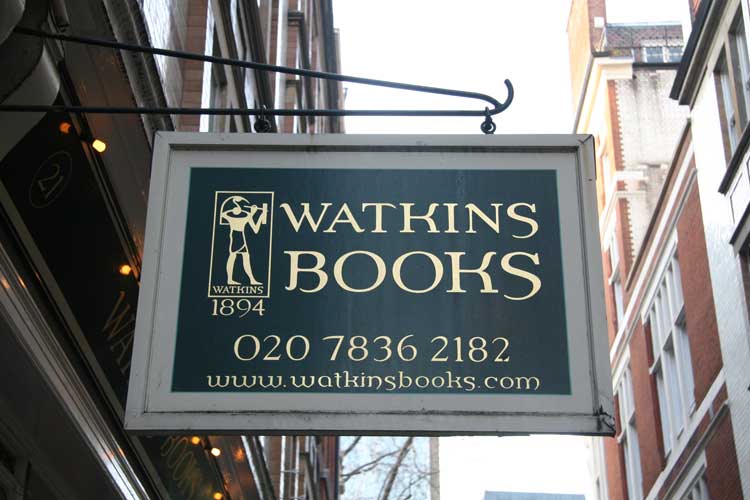 Colin Narbeth and Son Ltd, situated at number 20 on the right side of Cecil Court, has even decided to, quite literally, cash in on the huge number of Harry Potter fans who make pilgrimages here and has a window display of Gringotts Bank Notes featuring Harry Potter and his friends and enemies! 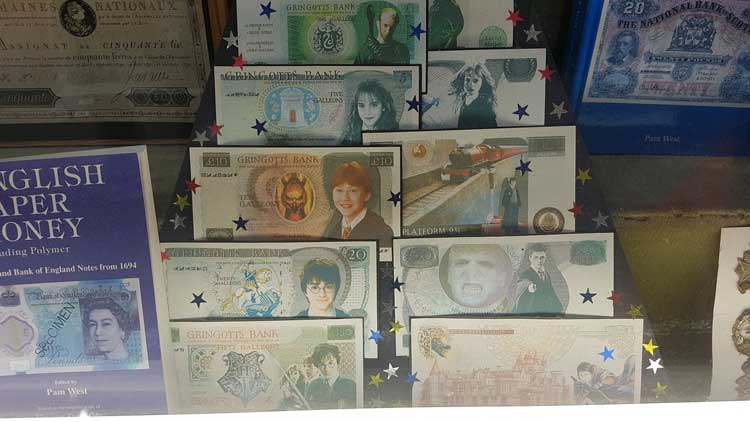 « Previous - Ministry of Magic Next - The Cursed Child »